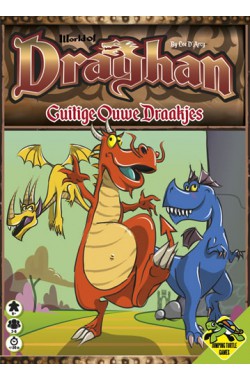 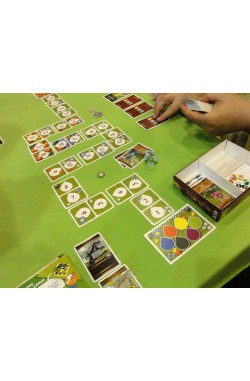 BESTELLEN
Verlanglijst
Product vergelijk
Omschrijving
This is the second game in the World of Dragan Series, sequel to World of Draghan: Once Upon a Dragon.
The game box also contains 2 additional dragon cards you can use in Once Upon a Dragon.
Many years have passed since the truce of Draghan, a day when both dragons and peasants agreed to live alongside each other respectfully. All residents of Draghan, be it skin or scale-covered, celebrate this anniversary with a race. Organised by the folk but run by the old dragons. The race is to a chest full of treasure, the very same chest that was offered at the truce to buy the dragon's favour. In the true spirit of the days gone by, the dragons now pit their wits against each other instead of the Draghanian folk...and today it seems you are a dragon...so you better be prepared!
Sneaky Ol' Dragons is a racing game full of surprises. A round starts with drafting the cards you are going to play that round. From the cards drafted you always play 2 cards on yourself and one card on each other player. So make sure when you draft you don't keep only good cards or you'll also help your opponents.
When all cards are assigned the cards will be executed one by one and the dragons will move on the racing track. Most cards just make your dragon go forward, but there are also many action cards available that influence the race.
Will you find a knight on your way? Only if you have enough courage left you will be able to beat him and continue your way. If you don't have the courage you'll have to run backward.
Just maybe your dragon will stop to smell a flower and blow himself backward when he sneezes (dragon have hay fever!) while the other dragons in front of you jump forward to avoid burnt bottoms.
Or will you encounter a novice wizard. You really can't predict what will happen when he fires off a spell with his wand and you are accidently in his way.
And the race will have quite a lot of additional surprises waiting for you to discover.
The game also includes some variations.
For example you can choose to hold the race in the enchanted forest on a "safe" forest path. Or you can hold the race in the mountains where you have to make sure you avoid the rockslides and jump over the dangerous holes.