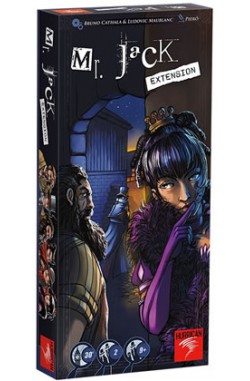 Prijs: 11,50€
Bij een bestelling van 50€ betaalt u: 10.93 €
Bij een bestelling van 100€ betaalt u: 10.35 €
BESTELLEN
Verlanglijst
Product vergelijk
Omschrijving
October, 1888 — Whitechapel, London: Jack's shadow still hangs heavy over the back-streets of the East End. Scotland Yard has assigned Inspector Abberline to take over the investigation, aided by five new detectives with extraordinary abilities. The new recruits include the formidable Professor Moriarty, who uses his intelligence and cunning to impersonate the other detectives. Is he trying to put Jack off his stride, or to outwit his rival Sherlock Holmes? Or could he even be Jack himself, disguised as Moriarty? Who is the elusive Jack? The unrelenting manhunt continues!
Mr. Jack: Extension is an expansion for the Mr. Jack deduction game that features refreshed artwork for the tenth anniversary of the game as well as an original character as strong as it is enigmatic: Professor Moriarty, whose special ability is to imitate one of the characters who is not at stake. Moriarty is quite the chameleon, impersonating the other detectives by mimicking their appearance and using their abilities!
This expansion lets you play with six new characters: meet the sultry Madame, flee the terrifying Pizer, avoid the revolutionary Joseph Lane's barricade, dodge Inspector Abberline's probing questions, bound along London's streets with the Spring-Heeled Man, and watch out for Moriarty. At the start of the game, choose which of the eight characters to play with via a draft and determine their starting locations. These new possibilities add fun and strategic depth.
Whether playing as Jack or the Detective, master them all to win!