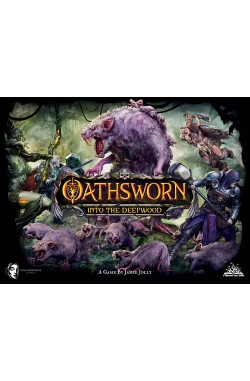 Prijs: 231,00€
Voor dit product betaalt u: 207.9 €
PREORDER
Verlanglijst
Product vergelijk
Omschrijving
Dit is de standee version van het spel!
Oathsworn is a Twisting Tales Game for 1-4 players where play is focused on narrative choices and rich miniature combat encounters. The game is set in the Deepwood where a Free company (the Oathsworn) fights for humanity's survival against unnatural horrors and the Deepwood itself.
Each gaming session sees the players participate in a multi path game book where the story unfolds to an inevitable encounter. The encounters are multi phase scripted boss fights on the encounter board where players have to outwit and outplay the AI driven monsters and enemies. As the sessions unfold the group is taken into a deep legacy campaign where they gain levels, loot and new allies to join them in their journey.
Oathsworn boasts a unique push your luck combat system of exploding dice where players are always having to decide between hitting harder and potentially missing the attack. This coupled with a euro style cooldown system called 'Battleflow' makes for a vibrant and engaging play session.