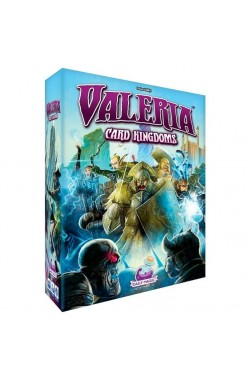 Levertijd: Voor 14u besteld, vandaag verzonden
Prijs: 38,50€
Bij een bestelling van 50€ betaalt u: 36.58 €
Bij een bestelling van 100€ betaalt u: 34.65 €
BESTELLEN
Verlanglijst
Product vergelijk
Omschrijving
Greetings Citizens of Valeria...
Valeria: Card Kingdoms is a tableau-building game for 1-5 players and will feel familiar to deck-building fans. The cards you buy can work for you on your turn and on all the other player turns, as well. On your turn, roll two dice and activate citizen cards with the result of each individual die and the sum of both dice. All players harvest resources at the same time. After you take your two actions, pass the dice. The player with the most victory points at the end, wins the game.
Make a Name for Yourself!
The aim of Valeria: Card Kingdoms is to become the next king of Valeria by having the most Victory Points at the game’s end. Points are gained by slaying monsters and buying domains. Additionally, your secret duke is revealed at the end of the game to accumulate more point according to your goal. The game ends immediately after all monsters are killed, or all domains are purchased, or when 2 (two) times the amount of players worth of stacks are taken from the center play area.