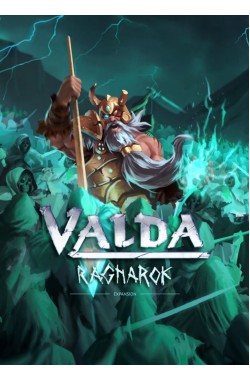 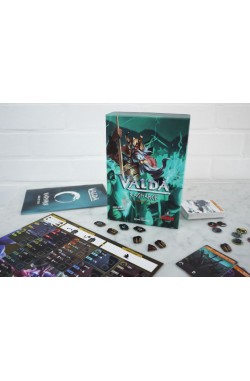 Levertijd: Voor 14u besteld, morgen geleverd
Prijs: 18,00€
Bij een bestelling van 50€ betaalt u: 17.1 €
Bij een bestelling van 100€ betaalt u: 16.2 €
BESTELLEN
Verlanglijst
Product vergelijk
Omschrijving
SUMMARY
Valda: Ragnarok is a an expansion to Valda. As in the base game, it is a power-building strategy game where you as a viking warchief use divine powers, manage a village and resources, play powerful spells and build temples. You gather followers, fight off enemies and climb the steps to divinity.
This expansion for Valda uncovers new treasures and new powers after the passage of the giants. 23 new cards for the base deck and 37 new god and giant cards that offer you new game mechanics and combo’s. A new card type and god, giant and treasure tokens complete this expansion.
STORY
After the arrival of the Giants, the world of Valda is on the brink of the final confrontation between the Giants and the Gods. Divine blood will flow, Gods will die, empires are about to crumble and Giants shall fall.. The end is near.
HOW TO PLAY (AND WIN)
In Valda: the Rise of the Giants, you now have a choice between Gods and Giants and their powers to use to your advantage.
When Ragnarok is played with only the base game: every player conducts 5 phases (Resource phase, action phase, building phase, attack phase and follower phase). When playing Ragnarok combined with the base game and Rise of the Giants expansion: every player finishes 4 phases during their turn (Valda phase, attack phase, follower phase and resource phase).
In the attack phase players now can attack the player in turn or attack a God / Giant of choice. Gods and Giants are no longer immortal and untouchable.
The viking chieftan who has the most followers when the ship arrives in Asgard, becomes the new ruler of the 9 worlds! Oh.. and he/she also wins the game.