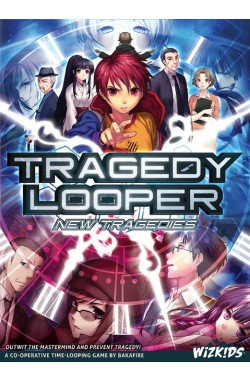 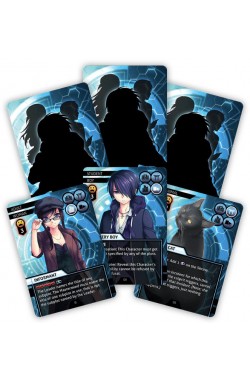 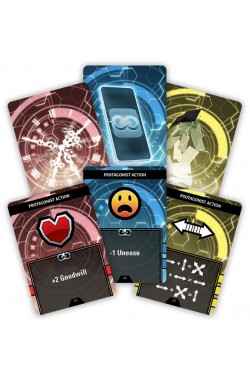 Prijs: 46,00€
Bij een bestelling van 50€ betaalt u: 43.7 €
Bij een bestelling van 100€ betaalt u: 41.4 €
PREORDER
Verlanglijst
Product vergelijk
Omschrijving
Some of you are able to travel back in time and have become the Protagonists of stories that unfold terrible tragedies. You need to discover a way to stop the tragedies from occurring, but there is a Mastermind whose sole purpose is to make sure they unfold. Can you stop the tragedies before the last loop?!
In Tragedy Looper: New Tragedies, 1-3 players are Protagonists attempting to escape a time loop engineered by one player acting as the Mastermind. The Mastermind player selects a script, either one of the 13 scripts included or one created themselves, and sets up the game accordingly. The Protagonist players don't yet know the details of the tragic events about to unfold.
Protagonists and the Mastermind will play cards, activate abilities, and trigger incidents to uncover (or hide!) information and move the events forward. Players will interact with different characters and build relationships with them in order to unlock and activate those characters' helpful special abilities, but of course the Mastermind is attempting to trick and mislead the Protagonists. At the end of each loop, if the Protagonists haven't guessed correctly, they rewind all game components back to the start and try again with more information. If they don't guess correctly on the final loop, the Mastermind wins!
The Tragedy Looper system creates a unique game of deduction in which players begin each new loop better prepared, but the Mastermind player will know what they've learned and can alter their strategy accordingly.
Tragedy Looper: New Tragedies is a standalone game that brings content from original publisher BakaFire into English for the first time, collecting 13 scripts and 30 characters. This game includes a teaching guide for the Mastermind and a "First Steps" tragedy set for the first two scripts to help players get more comfortable with the gameplay loop. Experienced masterminds can also create their own scripts.