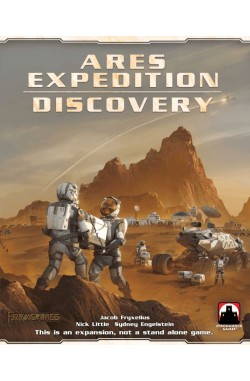 Prijs: 26,00€
Bij een bestelling van 50€ betaalt u: 24.7 €
Bij een bestelling van 100€ betaalt u: 23.4 €
PREORDER
Verlanglijst
Product vergelijk
Omschrijving
Terraforming Mars Ares Expedition: Discovery adds four new mechanics to base Ares Expedition: awards, milestones, upgraded phase cards, and wild tags.
Awards are end-of-game scoring that are granted to the player with the most of something. Three awards are drawn at the beginning of the game so that players know what they will be rewarded for at the end of the game. The player with the most of that item earns 5VP, second place earns 2VP.
Milestones are VP that are awarded during the game. They are granted to the player to first achieve the milestone. Milestones are worth 3 VP at the end of the game.
Some new project and corporation cards allow players to upgrade their phase cards. Each phase card has two different version that players choose from when they upgrade them. The upgrade gives the player a better bonus when they choose that phase.
Some new project cards have a wild tag. Whenever a player reveals this card either from the deck (due to an effect) or from their hand because they are going to play it, that player chooses what tag they want it to be. Tokens are used to keep track of what tag was chosen for the rest of the game.