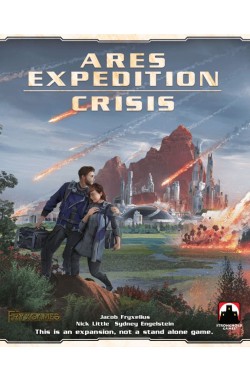 Prijs: 26,00€
Bij een bestelling van 50€ betaalt u: 24.7 €
Bij een bestelling van 100€ betaalt u: 23.4 €
PREORDER
Verlanglijst
Product vergelijk
Omschrijving
In Terraforming Mars Ares Expedition: Crisis, players will play as corporations, just as in the original Ares Expedition. You choose phases and play project cards as normal. The difference is players are working together to keep Mars habitable after a natural disaster has landed the planet in crisis. Every round, a new Crisis card will be drawn that will require the players to achieve a certain goal to remove that crisis from play. Each turn that a Crisis card is not completely dealt with, it will lower one or more of the terraforming metrics that keep Mars habitable.
Handle all the crises as they arise. Eventually, a Crisis card will be drawn that allows the players to win the game once they have completed re-terraforming Mars.