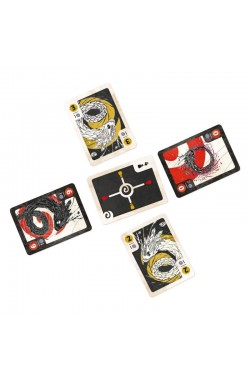 Prijs: 11,50€
Bij een bestelling van 50€ betaalt u: 10.93 €
Bij een bestelling van 100€ betaalt u: 10.35 €
BESTELLEN
Verlanglijst
Product vergelijk
Omschrijving
Tatsu is a trick-taking card game for 2 to 4 players in which you capture spirits to earn points by playing cards from your hand, while sometimes choosing when your opponent plays for you.
Carefully choose when to play your strongest cards and when to press your luck with fusion cards to collect even more cards from your opponent. You and your opponent have the same decks, though, and they can fight back just as hard as you, so always think two steps ahead in order to claim the most cards and (most importantly) your opponent's multiplier spirits. Spirits are divided into two distinct clans: red/black and yellow/white, and you can play Tatsu in teams or one-on-one.
The game ends when a player reaches 500 points, at which time the player/team with the most points wins.