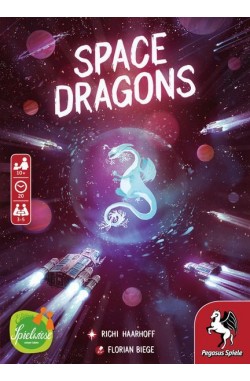 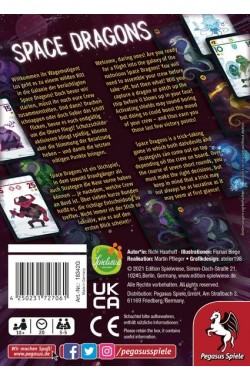 Levertijd: Wordt maandag verzonden
Prijs: 13,50€
Bij een bestelling van 50€ betaalt u: 12.83 €
Bij een bestelling van 100€ betaalt u: 12.15 €
BESTELLEN
Verlanglijst
Product vergelijk
Omschrijving
Welcome, daring ones! Are you ready for a flight into the galaxy of the notorious space dragons? You will need to assemble your crew before take-off, but then what? Will you capture a dragon or patch up the ship before it blows up in your face? Activating shields may sound boring but doing so could boost the mood of your crew — and thus earn you those last few victory points!
Space Dragons is a trick-taking-ish game that plays over seven rounds. Each round, everyone plays a single card, and the highest card played wins the current space dragon (trick). That said, lower-value cards come with strong effects to help you during the game, while high-value cards might contain harmful effects. What's more while space dragons score you big points, some come with symbols that could ultimately cost you points during the final scoring.
The player with the most points after seven rounds is the most daring dragon hunter and the winner of the game.