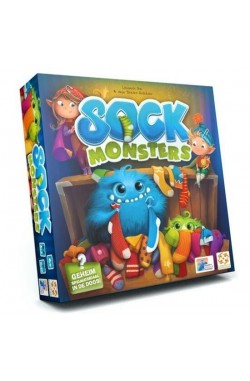 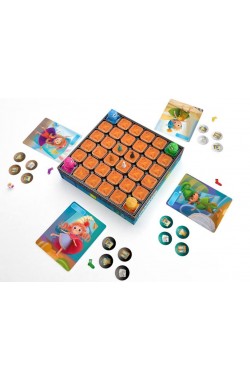 Levertijd: Voor 15u besteld, vandaag verzonden
Prijs: 28,00€
Bij een bestelling van 50€ betaalt u: 26.6 €
Bij een bestelling van 100€ betaalt u: 25.2 €
BESTELLEN
Verlanglijst
Product vergelijk
Omschrijving
While the house is empty, brave and industrious elves set out to tidy up. But the sock monsters are always lurking in the dark! Search chests and lockers, find socks and be the first to collect three pairs. Monsters are eager to steal lone socks. Watch out or, better yet, unleash them on your opponents. Explore new rooms, find useful items in the hidden compartments of the game box and watch the game evolve as you play.
Your game character is a brave and industrious elf trying to rescue socks from sock monsters. You start at the center of the game board, while monsters move from the corners in. Players make moves as monsters first. The monsters lurk around the house, always eager to steal a lone sock from a careless elf and carry it into a dark corner.
The next player to make a move takes a color die and puts it underneath his or her monster figure. When making a move, the players lift the figures slightly above the board, so the die underneath moves with the figure but is not visible from the outside. After making the move, the monster figure can be lifted to see the die. If the top face is showing a closed eye picture, this means the monster has fallen asleep and the player’s turn is over. If the die is showing an open eye picture, the player can perform an action.
After finishing the monster turn, the players then take a turn as elves, trying to find colored socks in chests and cabinets on the game board. If a matching pair of socks is collected, elves put them on their hands, feet and ears – and that’s really hard work!
The game ends when any one player has collected three pairs of socks.