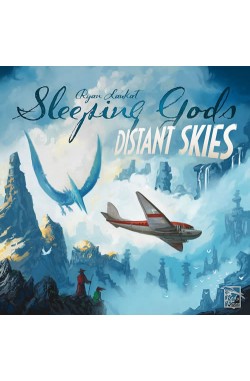 Prijs: 130,00€
Voor dit product betaalt u: 117 €
PREORDER
Verlanglijst
Product vergelijk
Omschrijving
San Francisco, 1937: Your cargo plane flies through a portal in the sky, transporting you to a rugged landscape filled with bizarre creatures, scheming gods, and untold dangers. But can you find your way back before the portal closes?
Sleeping Gods: Distant Skies is a standalone sequel set in the world of Sleeping Gods. As in the original game, you and your friends trek through a vast landscape as you read branching storylines and meet vivid characters, but in this game you interact with the atlas on a deeper level — camping, exploring, overcoming obstacles, and searching for lost relics. The new action system allows you even greater agency while you travel and explore.
In addition to the exploration and quest system from the original game, Sleeping Gods: Distant Skies features a fresh spin on combat. Players now build a combat deck from which they draw a varied hand of cards to play, making each combat encounter a fresh and dynamic puzzle.
Although Sleeping Gods: Distant Skies builds on story elements in the first game, you do not need to play Sleeping Gods to enjoy this sequel. The game features new characters and storylines, explaining concepts from the original game as you encounter them.
Return to the world of Sleeping Gods and experience a thrilling tale that hinges on your choices in a truly open-world experience!