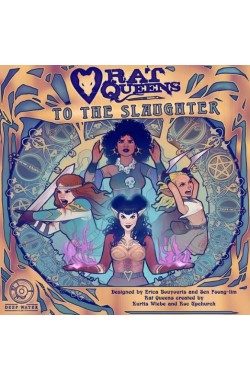 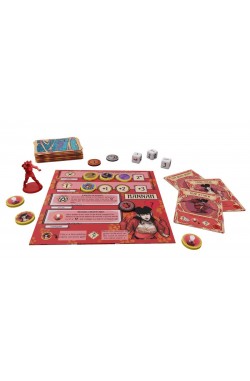 Prijs: 48,00€
Bij een bestelling van 50€ betaalt u: 45.6 €
Bij een bestelling van 100€ betaalt u: 43.2 €
PREORDER
Verlanglijst
Product vergelijk
Omschrijving
Forge friendships and find your family as you take on the role of the rat queens in Rat Queens: To the Slaughter. Choose from four rat queens, each with asymmetric and unique playstyles, in order to save Palisade from total destruction. Power up your queen with new abilities and friendship as you take on hordes of monsters. Each queen comes packed with upgradeable abilities you have to spend gold to learn, allowing you to customize your queen differently each game to fit what the party needs!
Players spend the first half of the game defeating monsters to earn rewards to upgrade their ability deck and stats in order to prepare for the Big Bad hiding in the wake. The more monsters you defeat, the more powerful you become and the more time you have before the Big Bad arrives, with that enemy being determined by which monsters escape. Combat is a simplified version of RPG-style combat with easy-to-learn dice checks for attacks and abilities.
From the first sip to the last drop. Sisters. Warriors. Queens. Friends to the very end.