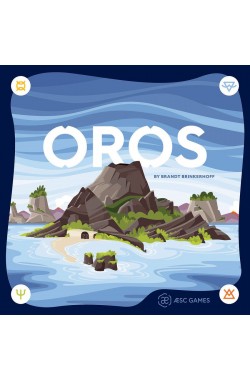 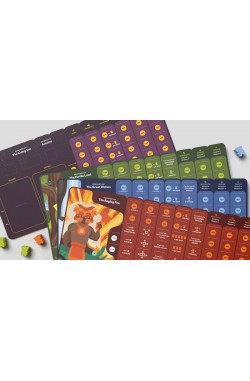 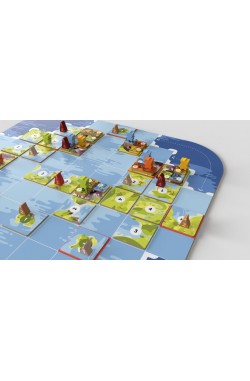 Prijs: 80,00€
Voor dit product betaalt u: 76 €
Bij een bestelling van 100€ betaalt u: 72 €
PREORDER
Verlanglijst
Product vergelijk
Omschrijving
The Wise One, immortal keeper of wisdom and knowledge, has sent Demigods endowed with earth-moving power to the far reaches of humanity. In Oros each player acts as one of these Demigods. They must instruct their Followers in the wisdom of the mountains through study, worship, and experience. And only in the heights of the mountains can the greatest mysteries be known.
Oros is a tile-colliding, volcano erupting, mountain-making, wisdom-gathering, action-economy strategy game. On individual player mats, players move their Followers between action spaces, allowing them to manipulate a shared environment like a giant puzzle of plate tectonics. Action spaces allow players to shift rows of land, move and collide land tiles, form and erupt volcanoes, worship to gain wisdom, journey their Followers around the ever-shifting landscape, and build sacred places of study and worship on mountains. Building sacred places and worshipping in sacred places brings wisdom which is used to improve the abilities available for each action space. Wisdom is also used to improve the end game value of each sacred place built as well as reach other goals worth end game points.
When building sacred places, the Demigods of the Wise One ascend a ziggurat which acts as a timer toward the end of the game. When one reaches the top, players finish the round and then tally a final score.
At the core of Oros is the unique ability to shift, move, build up, erupt, and reposition the land within an infinitely connected play environment. This mechanic turns every action into a puzzle of creative problem solving, abstract thinking, and a constantly evolving strategy. Another chief aspect of the game is the player mat which uses a minimal worker placement mechanic to govern action opportunity. The mat also maintains an action economy that evolves differently for each player as they invest their gained wisdom into a variety of action improvements. Because of these core aspects, there are dozens of strategies for players to explore, and every game plays out in a different, yet competitive way.