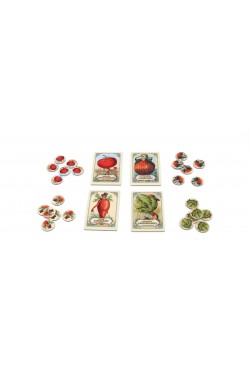 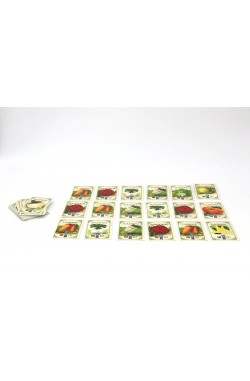 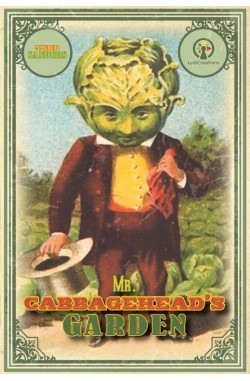 Prijs: 20,00€
Bij een bestelling van 50€ betaalt u: 19 €
Bij een bestelling van 100€ betaalt u: 18 €
BESTELLEN
Verlanglijst
Product vergelijk
Omschrijving
Each year Vernon Cabbagehead, (Mr. Cabbagehead to his friends), wants to be left in peace to grow his award winning vegetable garden for the annual Garden Club contest. However, his tedious neighbours tend to interfere when he is away, and frequently drop by to help themselves to the garden produce. Can Mr. Cabbagehead create a beautiful garden and finally win the blue ribbon?
In Mr. Cabbagehead's Garden, vegetable cards are drafted and placed in the garden plot, a grid of six cards by three cards. Depending on which cards are selected, one of the tedious neighbours may interfere with the garden in a variety of ways. Players must be careful in their choice of vegetable to plant, in its position in the garden, and in maintaining their supply of invaluable bees, which give Mr. Cabbagehead more flexibility in planting.
Once all cards have been drawn, the game is over and the Garden Club committee visits to evaluate Mr. Cabbagehead's garden. The number and position of vegetables matter, and players must be creative in developing a garden that is both pleasing to the eye and plentiful in vegetables.
Originally released in 2016 in a print-and-play version with four neighbours, the 2018 published deluxe edition of Mr. Cabbagehead's Garden adds more neighbours, more variety in scoring, and a streamlined set of rules that includes a fixed garden plot grid variant. More importantly, the published version includes rules for two players.