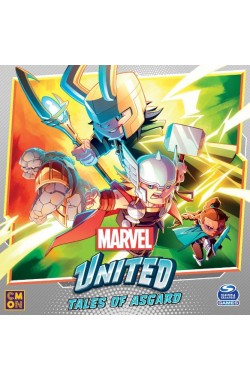 Prijs: 35,00€
Bij een bestelling van 50€ betaalt u: 33.25 €
Bij een bestelling van 100€ betaalt u: 31.5 €
PREORDER
Verlanglijst
Product vergelijk
Omschrijving
The Realm Eternal stands as a bastion of justice throughout the cosmos. Only Loki, the God of Mischief, dares threaten Asgard’s peace in his obsession with usurping the throne. Loki’s minions, all traitors and henchman mired in his tricks and illusions, work both secretly and openly to execute his master plan. It’s up to Thor, Valkyrie, and Korg to untangle the web of intrigue and bring Loki to justice. Trouble is, even knowing Loki’s ultimate goal, one can never be certain what traps the Trickster God has laid for the Heroes pledged to thwart his rightful rule.
Fortunately, the trio are not without their allies, Asgard being home to many of the universe’s most powerful individuals. But, can they all be trusted? Loki’s insidious illusions play upon hearts and minds, needs and desires, and no one, not even the Mighty Thor himself can wholly guard against his influence. Why, even one of the renowned trio might be unwittingly in Loki’s employ!
It’s a race against time and hidden fears as this Tale of Asgard unfolds.