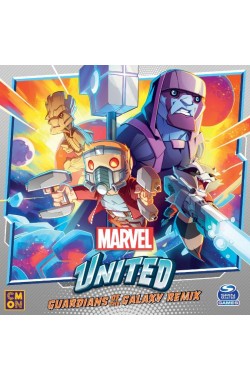 Prijs: 35,00€
Bij een bestelling van 50€ betaalt u: 33.25 €
Bij een bestelling van 100€ betaalt u: 31.5 €
PREORDER
Verlanglijst
Product vergelijk
Omschrijving
The Guardians of the Galaxy have made a name for themselves traveling the stars, fighting for the helpless, righting wrongs, and occasionally wronging a few rights. But, by and large, their good deeds outshine the bad, and Ronan the Accuser has had enough! The Guardians have interfered with Ronan’s people, the Kree, in their self-proclaimed righteous wars for the last time!
Ronan ranks among the most formidable villains the Guardians have ever faced, and his master plan is as simple as can be: put an end to the Guardians permanently. In personal combat, even the trio of Star-Lord, Rocket Raccoon, and Groot have little chance against The Accuser wielding his godlike Universal Weapon. They must scramble their way from star to star, helping where they can, and thwarting Ronan’s minions wherever possible.
No place is safe for the Guardians so long as Ronan hounds their tracks. Their only hope is to gather enough strength to finally defeat Ronan, or frustrate his plans long enough to give up the hunt. Either way, the Guardians of the Galaxy are in a race against time!