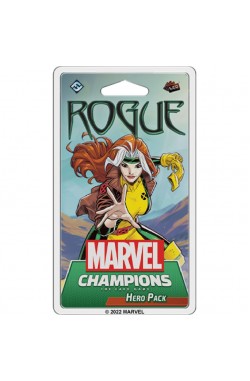 Prijs: 17,00€
Bij een bestelling van 50€ betaalt u: 16.15 €
Bij een bestelling van 100€ betaalt u: 15.3 €
PREORDER
Verlanglijst
Product vergelijk
Omschrijving
Cursed with an uncontrollable ability to absorb the powers and memories of anyone she touches, Anna Marie ran away from home as a teenager. Professor X offered her a place at his school where she could learn to harness her power for good. Now, she fights for justice as a member of the X-Men, Rogue!
This southern belle blasts her way into battle with this expansion pack, which introduces Rogue as a new playable hero along with her sixteen signature cards. With a pre-built Protection deck ready to play from the get-go, you’ll be able to stop the villain’s attacks in their tracks from the moment you open the box. With her abilities changing depending on who she touches, Rogue is a versatile hero who can face any threat.
This hero pack also includes a bonus modular encounter set featuring the cybernetically-enhanced Reavers!
For players eager to challenge Magneto and his Brotherhood of Mutants, they can get started with the Rogue Hero Pack! This expansion comes with a 40-card pre-built deck, giving players the chance to start playing right out of the box.