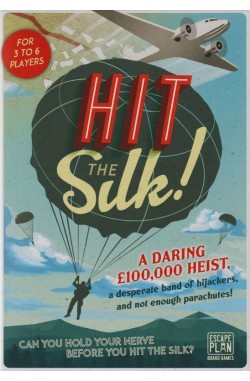 Prijs: 49,95€
Bij een bestelling van 50€ betaalt u: 47.45 €
Bij een bestelling van 100€ betaalt u: 44.96 €
BESTELLEN
Verlanglijst
Product vergelijk
Omschrijving
Hit the Silk! is a semi-cooperative game in which the team objective is to find the target cash between the players. The individual goal is to stay alive by securing a parachute.
It was always going to be a daring heist. Everything was going to plan until the pilot seized a gun from the lockbox, opened the emergency door and fired three rounds into the engine before bailing with his parachute and a spare!
You need to secure the loot but now you’re a parachute down on a plane that’s losing altitude. Fast. Who can you trust? Who’s got the cash? Where are the ‘chutes? Can you hold your nerve before you Hit the Silk!?
The gameplay is suspenseful and mischievous – each turn, players can search the plane frantically for useful equipment, trade from their inventory and play a variety of speculative actions; anything to secure a parachute or a briefcase of cash.
But with each action the altimeter needle drops another 500ft. With the ground approaching fast, you may need to forge an alliance. You’ll get a few chances to jump, but only with a majority vote. If trading nicely doesn’t work, you may need to resort to drastic action with the handcuffs, poison or revolver. What follows are tense standoffs, fragile deals and double crosses. And if all else fails, can you land the plane?