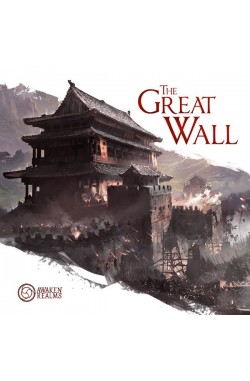 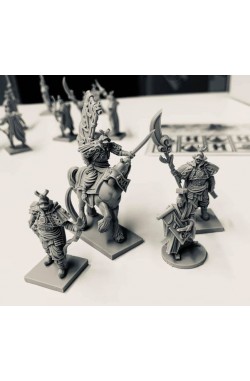 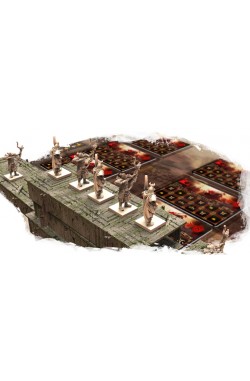 Prijs: 160,00€
Voor dit product betaalt u: 144 €
BESTELLEN
Verlanglijst
Product vergelijk
Omschrijving
Dit is de Dragon Pledge: The Great Wall Core Box, High Quality plastic miniatures (CB), All unlocked Stretch Goals
The Great Wall is a new asymmetric worker/soldier placement game with engine building themes and a twist in form of a constantly attacking AI (Mongolian Horde) that requires players to s
ometimes cooperate in order to defeat it. This is a new major board game from Awaken Realms.
Players will control ancient clans in China trying to defend invading Mongolian hordes and build a Great Wall. While every player will want to win (by earning VP = Honor) they also need to sometimes cooperate to defend against the hordes. Each clan will be asymmetric through its chosen Leader (resource production/starting resources/starting workers and units) and this asymmetry will increase as the game progresses (players will hire Advisors with unique skills, often creating unique engines).
The game is divided into 3 main phases: Production, Wall Defense, Wall Building. During the Production phase, players will place orders via cards (face down) at the same time and then decide on their time of execution based on the Tea track (that can be modified). Those orders will mostly revolve around worker placement on the economical map to gather resources/build armies/get more income or even getting more workers/advisers. Players will need to constantly keep track of different buildings as they will be able to get the result only when all the slots are filled (e.g. others players will put their workers there too).
During the Wall Defense phase, players will order previously produced armies (soldiers, archers, and cavalry) on Mongolian Horde cards on 3 different parts of the wall. By placing units they will receive special bonuses (resources or more) which is why the order of placing units is important. If any part of the Wall is breached (Mongolian hordes have bigger power than wall defense), all players suffer negative effects from horde cards.
During the third phase, players will have the opportunity to spend any number of resources to build a bigger level of wall in exchange for victory points.
During the course of the game, players will create their own unique engines based on their clan strength as well as interact with other players during all phases of the game, trying to get the most Honor points, that can be gained in a lot of different ways.