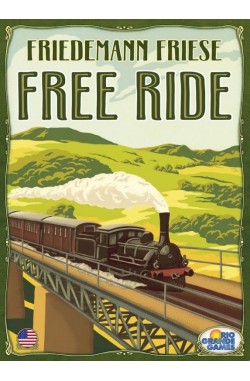 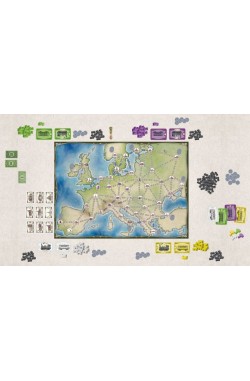 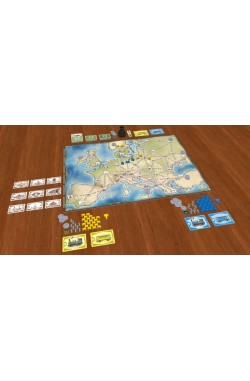 Prijs: 49,95€
Bij een bestelling van 50€ betaalt u: 47.45 €
Bij een bestelling van 100€ betaalt u: 44.96 €
PREORDER
Verlanglijst
Product vergelijk
Omschrijving
Around the end of the 19th century, a growing network of railway lines was built in Europe, allowing people to travel to the major cities to visit beautiful structures influenced by Art Nouveau and Historicism.
In Free Ride, you are one of several people in charge of building railway lines, connecting the cities in Europe, and carrying passengers to those cities. The game board shows 45 cities connected by a network of potential routes, and all railway lines built will be one of three types: lines owned by you, lines owned by fellow players, and state-owned lines. When you travel along railway lines, you pay nothing to travel on your lines and state-owned lines. To travel on a fellow player’s line, however, you must pay them 1 coin, which converts their line to state-owned. From then on, traveling on that line is free for all players. As coins are limited, you should carefully balance the building of your lines with the conversion of fellow players' lines to state-owned lines.
Where do you want to build? At the start of play, each player drafts part of a travel route. Multiple travel routes are available for choosing, and each travel route consists of three cards. When you choose a route, you take either the first and second cards or the second and third cards as your starting and ending point (in that order). Return the unchosen card of that route to the box. Place your train on that starting location. On a turn, take one of three actions:
Spend up to 2 construction points to place 1 or 2 rails from your personal supply on the board on vacant spaces, optionally spending 1 coin to buy five more rails from the supply before doing so. Rails cost 1 or 2 construction points to build. You must finish a line between cities before starting a new one.
Ride the rails, moving your train from one city to another over completed railway lines (paying an opponent if necessary) up to two times. If you reach or pass over the destination city of your travel route, you place the two cards of that route face down in front of you. You can then claim a new travel route, but only if your train is in or passes through your chosen starting city for that route. When city cards start to be drawn from the second 45-card deck, you can now have two routes underway; when city cards start to be drawn from the third deck, you can move from one city to another up to three times on a turn.
If you have 0 or 1 rails, you can take 5 rails from the supply at no cost.
Once the third deck is empty, you can either withdraw from the game with uncompleted routes (returning those cards to the box) or keep taking turns until you finish all your routes, at which point you immediately gain 1 coin and withdraw. In either situation, you earn 1 coin (and do nothing else) on each subsequent turn. Once all players have withdrawn, you tally your score, earning 3 points for each coin, 5 points for the first card you have of a city, and 2 points for each other card you have of a city. (Each of the 45 cities appears once in each of the three decks.) Whoever has the most points wins.
Free Ride also offers a difficult solo challenge!