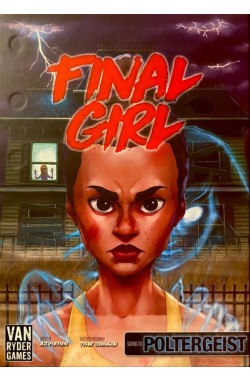 Prijs: 21,50€
Bij een bestelling van 50€ betaalt u: 20.43 €
Bij een bestelling van 100€ betaalt u: 19.35 €
BESTELLEN
Verlanglijst
Product vergelijk
Omschrijving
Final Girl Feature Film Box
When a family moves into infamous Creech Manor, their little girl Carolyn begins noticing supernatural phenomena. Produced by A.J. Porfirio, this Feature Film box has a killer of a different kind! Can the babysitter turned savior find Carolyn and get out before it's too late? Tyler Johnson reprises his role as Director of Photography in The Haunting of Creech Manor!
The Core Box, when combined with one of our Feature Film Boxes, has everything you need to play the game. Each Feature Film Box features a unique Killer and and iconic Location, and the more Feature Films you have, the more killer/location combinations you can experience!
Each Feature Film Box is double-sided, with amazingly illustrated covers on the front AND back. Not only that, but the magnetically attached box covers are removable, with the reverse of each functioning as the Killer and Location boards respectively.