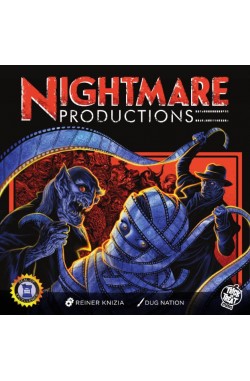 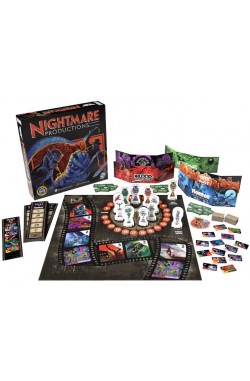 Levertijd: Voor 14u besteld, morgen geleverd
Prijs: 66,50€
Voor dit product betaalt u: 63.18 €
Bij een bestelling van 100€ betaalt u: 59.85 €
BESTELLEN
Verlanglijst
Product vergelijk
Omschrijving
Reiner Knizia's auction game about producing movies. In four rounds, players bid on chips representing genuine directors, actors, camera, effects, music, guest stars and agents. These all get placed on players' film-strips, to complete the movie production. So one movie might need 2 actors, but no music or effects and so on. As films are completed, the points value is marked and another film-strip taken. There are two parties each round where players get to pick from offers without paying anything. There are bonus points for first films completed and best films, best directors, even worst film.
The auction is a basic rising offer with passing until one winning bid remains. Players pay into the pot with contracts as money, and the rest of the players share the pot each turn. So it's a closed economy with players trying to time to bid on what they really need to complete films.