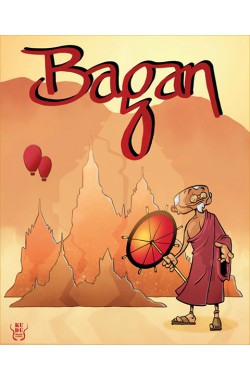 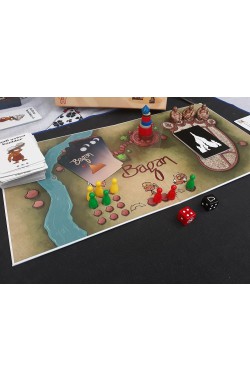 Bagan is a mystic place, in the heart of Myanmar. It is a place filled with thousands of towers and temples, as far as the eye can reach. It is one of the most intriguing places on earth! But in this area you can expect some devastating earthquakes.

The aim of the game is to build temples in the city of Bagan in order to collect the most points. In the building school, you can train your builders to become a master or architect. This will make it easier for you to build the right building pieces, but you will not be able to use those builders to build on temple grounds. A part of the game play is based on that other famous tower, the Hanoi tower. This means you can not build or move a large boulder on top of a smaller one.

A player's turn consists of:

Play continues until all the action cards have been used or until the Central Temple has been completed. Then, points are counted.

The higher the temple, the more points you get. Empty or hardly built-up temple grounds with only one building piece give you penalty points. The player with the highest score wins.

The game is a mixture of strategy, luck and tactics. A lot of choices have to be made: Choose whether to train your workers, or let them build temples. Choose whether to build higher temples or more. Decide whether moving a boulder is a better choice than building one...