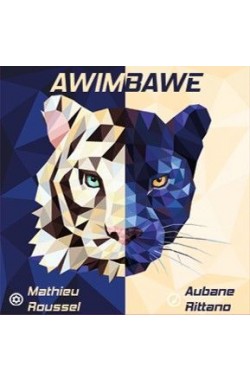 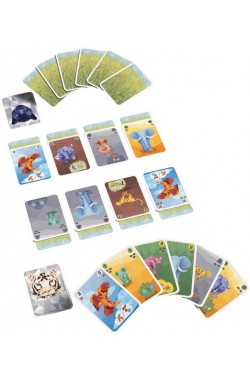 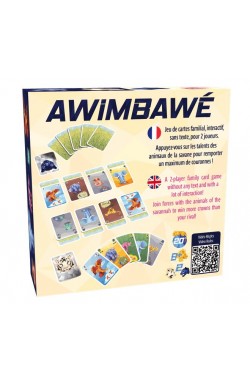 Levertijd: Voor 14u besteld, morgen geleverd
Prijs: 11,50€
Bij een bestelling van 50€ betaalt u: 10.93 €
Bij een bestelling van 100€ betaalt u: 10.35 €
BESTELLEN
Verlanglijst
Product vergelijk
Omschrijving
A wild duel for a throne …
The king is dead, who will succeed him...
Join forces with the animals of the savannah to win more crowns than your rival!
The rhinoceros rushes straight ahead, the snake hypnotizes another animal… but be careful and avoid being overrun by hyenas.
Awimbawé is a 2 player trick taking game. Collect the mosts crowns by taking tricks while avoiding collecting all four hyena cards. Win 2 rounds to become the new king or queen of the Savannah.
At the start of the game each player takes an heird card the white Tiger or the Black panther on their silver side. Shuffle the 28 cards, then put 4 cards face down in front of each player covered with 4 cards face up.
6 cards will form their starting hand only the cards that are visible are immediatelely available that means you can only play the cards in your hand or one of the face up cards in front of you.
On each turn, the first player plays one of their available cards and can immediately activate its power.
Then their opponent plays a card and can also activate its power.
Each card also has a suit represented by the landscape on the background : grassland, desert, plain and mountain. There are some rules, the second player must follow. That means they must play a card of the same land as the lead card if they have it available.
If they do not have the lead color available they must play an eagle card and if they do not have an eagle card they can play any card.
But who wins the trick ? If the second player follows, the trick is won by whoever played the highest value card. If the second player played an eagle card they can decide wether to flee or fight. If they flee they lose the trick but keep the eagle card in their scoring pile. If they fight they win the trick.
Finally if the second player neither followed nor played an eagle card, they lose the trick.
Let’s have a look to the powers of the animals.
The mouse always wins a trick against an elephant of the same land even if its value is lower.
The rhinoceros lets you move a card place on top of one of your opponent’s piles under any other one of their piles leave the card as it is face up or face down.
The player who plays the cheetah decides who will lead the next trick regardless of who wins the trick. If two cheetah cards are played during the same trick, the second one is the one to decide.
Hyenas give you a lot of crowns but if you get all four of them you immediately lose the round.
The snake lets you block one of your opponent’s available cards. Place the block card horizontally. This cannot be the next card your opponent will play. You can also block a random card from your opponent’s hand. Once your opponent has played another card, the car dis no longer blocked.
The elephant has no special power. It has the highest value among terrestrial animals but loses the trick against the mouse.
Turns are played one after the other.
The round ends when one of these conditions is met :
- if a player gets all four hyena cards, they immediately lose the round,
- if all cards are played and nobody got 4 hyena cards
Sum up the crowns on your scoring pile, the player with the most crowns wins the round.
Win 2 rounds to become the new king or queen of the Savannah.