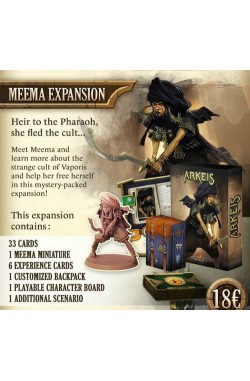 Prijs: 23,50€
Bij een bestelling van 50€ betaalt u: 22.33 €
Bij een bestelling van 100€ betaalt u: 21.15 €
PREORDER
Verlanglijst
Product vergelijk
Omschrijving
Amidst the dunes shifts a mysterious silhouette. It’s hard to make out its details, as large veils hide its true form to the curious eyes who gaze upon it. But as it gets closer to your camp, you soon understand that this newcomer brings one more enigma with it, one more mystery that needs be solved… and this enigma is called ‘Meema’.
The Meema Expansion contains many elements, among which Meema herself occupies the central spot: she’s a fully playable character joining the four colorful characters already available! In order to fit into your games, she comes with her own miniature, player board and Experience cards.
But that’s not all! The expansion also contains a new scenario in which Meema will take the stage!
This exclusive episode takes place before the main campaign begins and will teach you more about her and her place in the grand story of Arkeis…