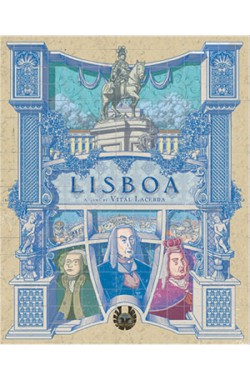 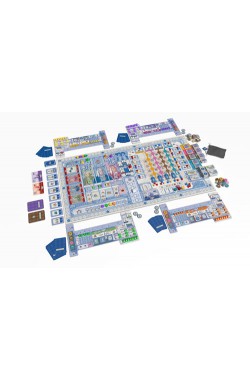 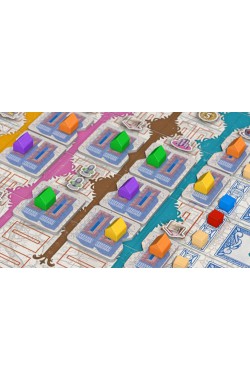 Lisboa is a game about the reconstruction of Lisboa after the great earthquake of 1755.

On November 1st of 1755, Lisboa suffered an earthquake of an estimated magnitude of 8.5–9.0, followed by a tsunami, and 3 days of fires. The city was almost totally destroyed. The Marquis of Pombal, Sebastião José de Carvalho e Melo, was then the minister of foreign affairs and the king put him in charge of the reconstruction of Lisbon.

Marquis of Pombal gathered a team of engineers and architects. We, the players, are nobility members that will use his influence in the reconstruction, and in the business development of the new city. They will work with the architects to build Lisboa anew. With Marquis to develop the commerce and the king to the openings of all the buildings, but the truly reason you are doing this is not for greatness, or fame or even fortune, but for the most important thing of all in that time: Wigs.

Lisboa is played on a real map of downtown Lisbon. During the planning of downtown project, the type of Business permitted in each street was previous determined.

The economic motor is driven by the wealthy of the royal treasure. And this treasure is controlled by players actions during the game, making each match a total different experience.

The game ends after a fixed number of rounds. The winner is the player who gathers the most Wigs by the end of the game.

Is a city building and economic eurogame.

During game, players schedule hearings to get characters favors. Like commerce, constructing and openings. The iconic buildings score the stores and stores provide income to the players.

In Lisboa players need to manage influence, construction licenses, store permits, church power, workers and money. Workers cost is dependent of the prestige of the players.

In Lisboa you can be the Grand Builder of one of the most iconic and beautiful cities of the modern world.