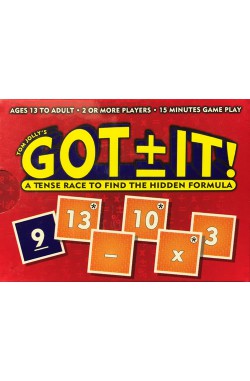 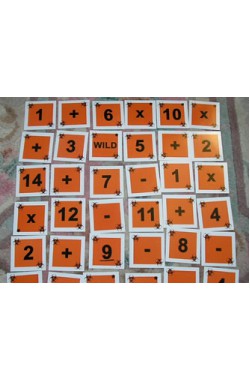 The math game Got It! – which had a working title of Fermat – accommodates as many people as fit around the table. What they're looking at on the table is a 6x6 grid of cards, with half the cards numbered 1-14 and the other half bearing mathematical operators. To set up the game, these cards are placed randomly checkerboard-style, with numbers and operators placed adjacent to one another.

Everyone plays simultaneously, with players trying to find a five-card formula that results in the number shown on a goal card, with goals ranging from 1 to 40. The solution must consist of orthogonally adjacent cards, though not necessarily in a straight line, and a player can't use a card twice in a formula. If a 12 is turned up as the goal, for example, one might find "8+4x1" in the grid, then shout out "Got It!" Players can mentally insert parentheses into a formula, so "7+2x3" can result in (7+2)x3 (=27) or 7+(2x3) (=13).

The first player to shout with a correct formula – and the grid might contain many – claims the goal card. The player who collects the most goal cards wins!

An easy version of Got It! can be set up for younger players, with a 5x5 grid that contains only the numbers 1-9 and only addition and subtraction as mathematical operators.