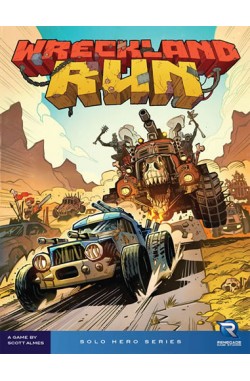 Prijs: 56,00€
Voor dit product betaalt u: 53.2 €
Bij een bestelling van 100€ betaalt u: 50.4 €
PREORDER
Verlanglijst
Product vergelijk
Omschrijving
Dit is de'Make the Run' kickstarterversie en bevat: Wreckland Run Core Game,Wreckland Run Fallout Expansion.
Load up your vehicle with supplies, strap on a few weapons, and prepare to make your wreckland run.
Wreckland Run takes place in a post-apocalyptic landscape known as the Wrecklands that's filled with marauders and other dangers. Wreckland Run is played across a campaign consisting of 7 chapters. With each new chapter, the continuing story will unfold in the campaign book. You will be instructed to open up a new envelope that adds exciting new bosses, enemies, and gameplay twists. The contents of these are secret for now. Do not reveal them until you’ve been instructed to!
At the start of the campaign, you will first choose a vehicle and driver. Choose wisely, as this will be your combination that you’ll carry across all 7 chapters. Once you’ve completed a chapter, you will move on to the next chapter in the campaign, but the enemies and Parts you’ve encountered will remain in their decks, increasing the power of your arsenal but also the ferocity of your foes!
The game is played over three rounds, each consisting of to phases, Wreckage and then Run. In Wreckage you'll repair and outfit your vehicle with new and upgraded parts. In the Run phase, you battle enemies over a series of turns, and hopefully survive to fight another day! You win by defeating the Boss in the third and final round of the game!