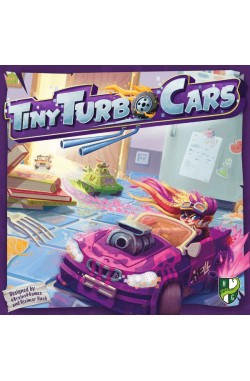 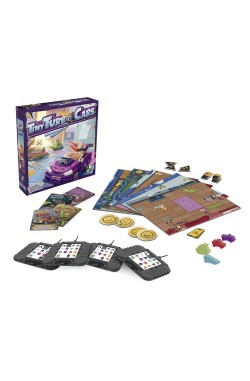 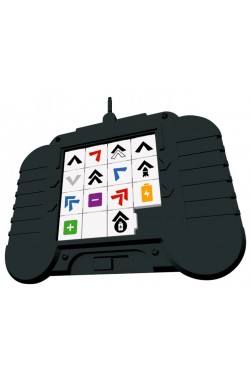 Prijs: 39,00€
Bij een bestelling van 50€ betaalt u: 37.05 €
Bij een bestelling van 100€ betaalt u: 35.1 €
PREORDER
Verlanglijst
Product vergelijk
Omschrijving
Tiny Turbo Cars is a frantic race game for 2 to 4 players in which you program the movements of your tiny toy car in advance, with a sliding puzzle acting as your remote controller.
Choose your car, grab your remote controller, create the track, and get ready to race! At the beginning of each round, players have to work their way through their sliding puzzle controllers simultaneously, trying to create the sequence of actions they want their car to perform during the round.
Each symbol on the puzzle corresponds to one of the possible actions — but only the two middle rows of commands on your controllers will be applied, so there's room for maneuvers, but be quick! The first player to put down their controller will be the first to move their car during the round. Each player then executes the program they created, and the sooner you play during a round, the safer you are that your actions will actually play out as planned rather than crashing into unexpected obstacles...or other cars!
But trying to be quick might also increase your chances of making mistakes, and every time you take damage, you lose battery power, which will slow you down. But hey, mistakes happen, right? You can always recharge and be back in the race.
This is a fierce race, with pitfalls around every corner and unscrupulous adversaries! Don't miss your chance to shoot your missiles at your opponents — before they hit you! The first player to cross the finish line wins!