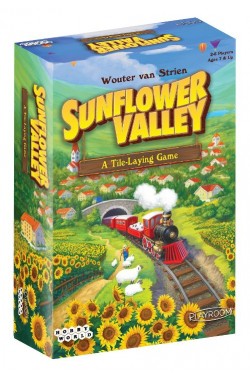 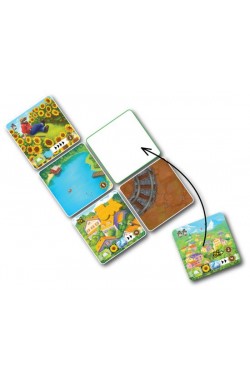 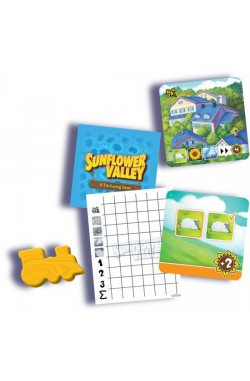 Levertijd: Voor 15u besteld, vandaag verzonden
Prijs: 21,00€
Bij een bestelling van 50€ betaalt u: 19.95 €
Bij een bestelling van 100€ betaalt u: 18.9 €
BESTELLEN
Verlanglijst
Product vergelijk
Omschrijving
Sunflower Valley: A Tile-Laying Game is a fast-paced game about settling your own perfect mountain valley. During the game, you will be choosing whether you want to fill your land with high pastures - and the choice wont be easy! The railroad will connect your towns and will turn life in the valley into a never-ending holiday. Are you ready for this journey? The train is leaving the station!
SETUP
1. Each player gets a Valley Express token, a Starting Town tile, and 20 Valley tiles with the same color as the roofs of their Starting town.
2. Each player places their Starting Town tile in front of them with their Valley Express token on top of it. This token will track the progress of their Valley Express, making sure to have space around their Starting Town for their Valley to expand.
3. Each player shuffles their Valley tiles and places them in a face-down pile in front of them.
GAMEPLAY
The game is played over 3 rounds with each player settling their own valley. Each round, all players simultaneously perform their actions as follows:
1. Each player draws 7 tiles from their pile.
2. Each player chooses any 1 tile from their hand, reveals it, and plays it next to a tile in their valley (attaching it horizontally or vertically to any car they have played, however they are not allowed to play tiles diagonally). The tiles are to be revealed and played at the same time.
Important: Once played, the tile can't be rotated or moved later.
3. Next everyone passes their remaining hand face-down to the player on their left.
4. Steps 2 and 3 are repeated until the final remaining tile of each hand is passed.
5. With the final tile, each receives the singular tile and places it at the bottom of their pile and the round is over.
Note: The leftover tile from the first round will come back to their hand in the third round. The leftover tile from the second round won't come back to you.
By the end of each round, there should be 6 new tiles played and by the end of the game, each valley should contain 19 tiles (1 Starting Town and 19 Valley tiles).
END OF GAME
When the third round is over, the players tally their points. The points are scored only for the tiles in the valleys, the tiles left in the piles are ignored. Whoever has the most points wins! In case of a tie, the player with the most towns in their Valley Express wins. If there is still a tie, the tied players share the victory.