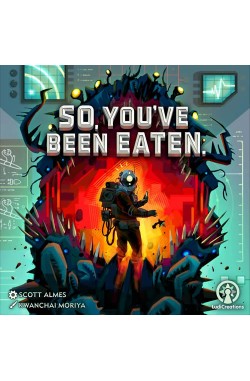 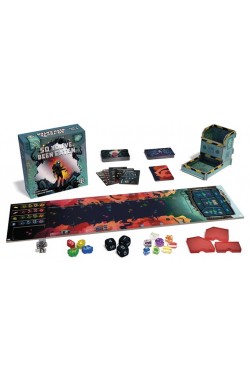 Levertijd: Voor 14u besteld, vandaag verzonden
Prijs: 47,00€
Bij een bestelling van 50€ betaalt u: 44.65 €
Bij een bestelling van 100€ betaalt u: 42.3 €
BESTELLEN
Verlanglijst
Product vergelijk
Omschrijving
Dit is de Kickstarter Collector Edition en bevat: Custom-shaped printed plexiglass Crystals,Custom-shaped wooden Bacteria,The Dyspepto-Beastmol mini-expansion
Limited edition custom-shaped printed wooden Robot Miner,Triple-layered boards,A custom-embossed 18mm Digestion die,3 custom-shaped clear plexiglass Upgrade tokens,3 illustrated tuckboxes for cards & other components,A cardboard dice tower,A deeper box to keep all of the above,UV printing on the box
So, you've been eaten. Don't worry, this is simply an occupational hazard. In fact, it is fairly common among Deep Space Miners (5th class), and some say that it is almost unavoidable. And, well, it is. Especially since the crystals that you seek happen to be inside giant space beasts. To mine them, you need to, well, be eaten.
In So, You've Been Eaten., the Miner and the Beast face off against one another. The Miner earns points by collecting crystals, and the Beast earns points by developing immune responses and by its bacteria attacking the Miner.
The Miner wins instantly by collecting all eight different crystals, and the Beast wins instantly by digesting the Miner after the attack of four bacteria of the same type. Of course, there's always the possibility that the Miner will simply pass through the Beast's system, in which case the player with the most points wins!
So, You've Been Eaten. can be played as:
A game for 2 players, with a Miner player against a Beast player.
A game for 1 player, with the Miner player against a sleeping Beast.
A game for 1 player, with the Beast player against a robot Miner.