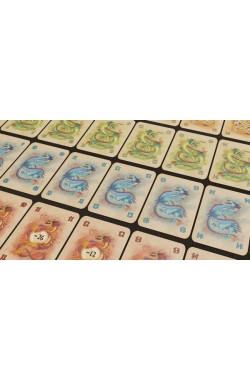 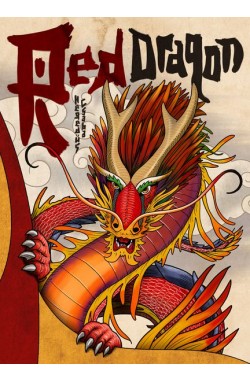 Prijs: 15,50€
Bij een bestelling van 50€ betaalt u: 14.73 €
Bij een bestelling van 100€ betaalt u: 13.95 €
BESTELLEN
Verlanglijst
Product vergelijk
Omschrijving
The Red Dragon is a trick-taking playing card game for 3-6 players. It is played with 60 cards (4 colours, each with a value 0-14). The goal is to have the most points by the end of the game (containing as many rounds as the number of the players).
At the beginning of the round cards are dealt equally to the players (10 cards each by 6 players, 12 by 5 players etc.). Each player chooses cards from the hand and places them face down in the middle of the table (3/4/5/6 players 4/3/2/2 cards). After turning them up, each player picks cards from the table (3/4/5/6 players 4/3/2/2 cards).
The player on turn plays a card. The player on left must play a card of the same colour as the card of the player that started the round (but no trick compulsion). If he does not have such a card, he can play any card. Other players play a card according to the above mentioned rules as well in clockwise direction.
The player whose card has the highest rank of the led colour gets the trick. He puts the trick onto his pile (face down). The round ends when players are out of cards.