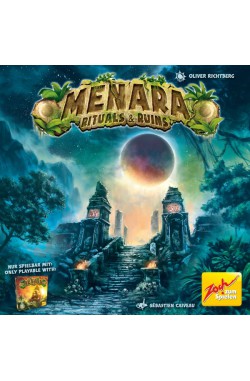 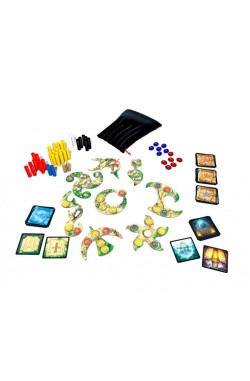 Levertijd: Voor 15u besteld, vandaag verzonden
Prijs: 23,00€
Bij een bestelling van 50€ betaalt u: 21.85 €
Bij een bestelling van 100€ betaalt u: 20.7 €
BESTELLEN
Verlanglijst
Product vergelijk
Omschrijving
Rituals & Ruins, an expansion to the co-operative building game Menara, has a lot to offer: spectacular temple floors, golden columns… and then there even are tears of the gods, trying to keep players from their collective success. The crew always takes on a scenario of its choice.
As in the basic game of Menara, the temple builders gather information and seek the advice of their fellow players before each game turn. Construction plan cards specify in what way temple floors are to be equipped with columns. The new rituals create new challenges; to meet these, players need well-conceived cooperation, clever statics, and steady hands.
----
Make your own set of rules. Choose from pre-set scenarios or mix the rules you like from a variety of new rules.
5 new types of construction plan cards present you with new challenges.
8 new temple floors of tricky shape want to be built into the tower. But each floor has its own rules, which can make the planning of your comrades much more difficult. Deal with temple floors of strange names like "The Double Axe", "The Wheel of the Five Winds", "The Wedge Moon", "The Bridge of Dangers", "The Ring of Balance", "The Wheel of Three Truths", "The Thorn Moon" and "The Crescents of the Sun".
The tears of the gods, red and blue crystal stones, want to be cleverly built into the tower before the temple is completed.
The cards of fate determine the shapes of the temple floors you can expect in the course of the game. But by no means all future floors will be revealed to you immediately...
13 rituals await you: For each game, you draw a ritual card, which changes the rules of the game and sometimes requires a completely different approach to the usual tasks.
Play the rituals: "THE ENLIGHTENMENT", "THE DARK", "THE BAN OF THE BLUE COLUMNS", "THE CURSE OF THE GODS' TEARS", "THE GRACE OF THE YELLOW COLUMNS", "THE JINXED YELLOW COLUMNS", "THE UNHOLY WHITE COLUMNS", "THE THIN TIP", "THE SLIGHT EARTHQUAKE", "THE GLOWING RED COLUMNS", "THE BALANCE OF FATE", "THE NARROW BASE", and "THE NARROW BASE".
10 ready-made scenarios let you quickly set up a unique game. Master the scenarios: "Wheels and the Drifting Columns", "Ruins and Tears", "Blockades", "The Blue from the Sky", "Hard Times", "High Up", "In the Heat of Battle", "Bright as the Day of Light", "Who has the Choice Has the Agony" and "The Yellow Danger".