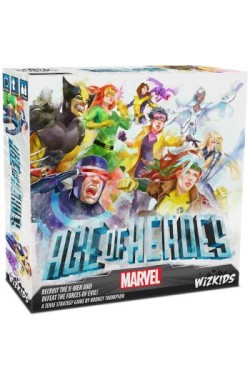 Prijs: 84,50€
Voor dit product betaalt u: 80.28 €
Bij een bestelling van 100€ betaalt u: 76.05 €
PREORDER
Verlanglijst
Product vergelijk
Omschrijving
WizKids has announced that they will be releasing a new Marvel-centric board game title, named Marvel: Age of Heroes X-Men. As 2-5 players are challenged to recruitment, bringing the likes of Jubilee, Wolverine and Lockheed into a series of missions for justice, and villainous takedowns!
Players will be coming up against some of Marvel's greatest and classic X-Men villains, including Magneto, with each character weft into three different scenarios. Hoping for a good old-fashioned mutated team-up, players will be flexing the abilities of each X-Men to deal damage to villains as each hero has a place in the game, serving a particular purpose in the development of the scenario.
There's no need to fight alone, players will be recruiting allies with special abilities to ensure the takedown of villainous deeds. Requiring players to manage resources to thwart and stop any action on the wrong side of the law in its track. Showcasing the likes of Jean Grey, Wolverine, Storm, Gambit, Rogue, Cyclops, Jubilee, Forge, and Lockheed as 2D in-game standees.