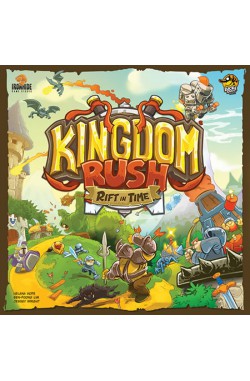 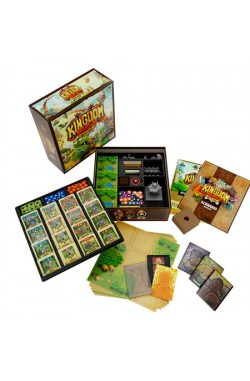 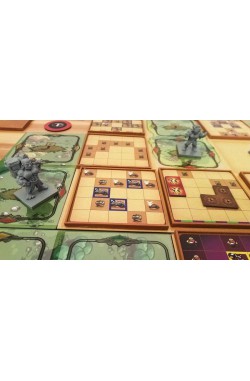 Prijs: 75,00€
Voor dit product betaalt u: 71.25 €
Bij een bestelling van 100€ betaalt u: 67.5 €
BESTELLEN
Verlanglijst
Product vergelijk
Omschrijving
Dit is de kickstarter King Pledge met de deluxe upgrade box en alle unlocked stretchgoals!
Welcome to Kingdom Rush: Rift in Time, where you and your allies must work together to fend off the furious onslaught of the mysterious Time Mage. Command Heroes and build Towers to defend the realm by placing polyomino pieces to attack your enemies and deploying soldiers to hold back the ever-advancing horde. Be careful, though! The Time Mage’s portals are wreaking havoc, causing all of the Towers to warp in and out of existence! Will you play your Towers to defend the Kingdom, or will you pass them to your compatriots so that the Towers can be upgraded? The decision is yours!
Play through a unique campaign to foil the Time Mage’s plan for total domination of the space-time continuum. Each new scenario in the campaign is more challenging than the one before it, introducing formidable foes, game-changing events, and epic bosses to battle! The only way to stop the Time Mage is to close all of their pesky portals but you’ll have to do so while combating wave after wave of their minions. Fight back with unique Heroes, special abilities, and an awesome arsenal of upgradable Towers. The Time Mage will stop at nothing as they try to take over the Kingdom and neither should you - archers ready!