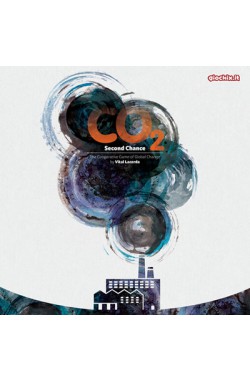 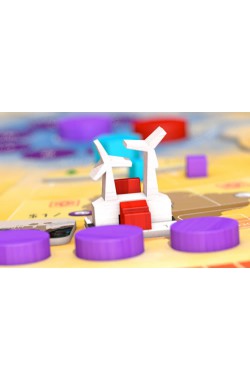 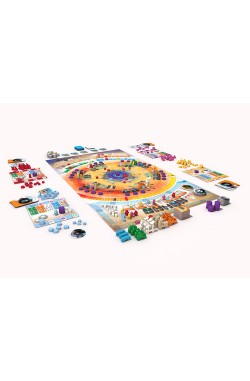 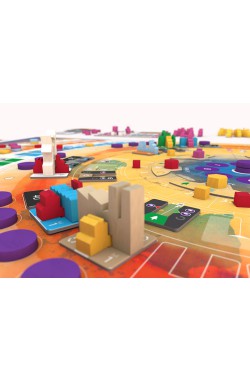 This new totally re-designed edition will bring a completely new iconography, an entirely new rulebook with lots of 3D pictures for easy comprehension of the rules, more balanced gameplay, a new events deck, improved and streamlined mechanisms, upgraded wood components for the power plants instead of the cardboard tokens, while maintaining the beautiful illustrations on the board and cover, and all this with a shorter play length.

This version will also bring a cooperative mode of play. And a solo play based on goals.

In the 1970s, the governments of the world faced unprecedented demand for energy, and polluting power plants were built everywhere in order to meet that demand. Year after year, the pollution they generate increases, and nobody has done anything to reduce it. Now, the impact of this pollution has become too great, and humanity is starting to realize that we must meet our energy demands through clean sources of energy. Companies with expertise in clean, sustainable energy are called in to propose projects that will provide the required energy without polluting the environment. Regional governments are eager to fund these projects and to invest in their implementation.

If the pollution isn't stopped, it's game over for all of us.

In the game CO₂, each player is the CEO of an energy company responding to government requests for new, green power plants. The goal is to stop the increase of pollution while meeting the rising demand for sustainable energy — and of course profiting from doing so. You will need enough expertise, money, and resources to build these clean power plants. Energy summits will promote global awareness, and allow companies to share a little of their expertise while learning still more from others.

In CO₂, each region starts with a certain number of Carbon Emissions Permits (CEPs) at its disposal. These CEPs are granted by the United Nations, and they must be spent whenever the region needs to install the energy infrastructure for a project or to construct a fossil fuel power plant. CEPs can be bought and sold on a market, and their price fluctuates throughout the game. You will want to try to maintain control over the CEPs.

Money, CEPs, Green Power Plants that you've built, UN Goals you've completed, Company Goals you've met, and Expertise you've gained all give you Victory Points (VPs), which represent your Company's reputation — and having the best reputation is the goal of the game … in addition to saving the planet, of course.

Added cooperative mode, which is now the main game (but you still get the full competitive game, too!). New private goals to play the co-op version. Event goals were created for the co-op version. Different UN goal cards, and different point values. You can claim a UN goal card if you have the right infrastructure, while in the original you needed the right power plants. The way summits give points has been altered a bit, but it works basically the same way. A few new endgame objective cards have been added, and some have been tweaked. Your scientist must leave the Project tile to get you knowledge. Scientists are no longer allowed in infrastructures. You can sacrifice a scientist to take a minor benefit from lobby cards that have already been played. Hiring a scientist gives you a “wild” knowledge point. No more payment to other players. When the scientist moves out, the scientist’s owner gets a knowledge point.  Placing projects gives you a knowledge point. Building a plant costs a CEP. New goal cards. Events work a bit differently: They now cost a CEP as well, and if pollution is above 400 ppm, 2 events occur, instead of just 1. Added UN Inspectors Variant. One turn fewer per decade in both versions. One decade fewer in co-op. Spend points to reduce CO₂ and pay for events. You lose if your points go below zero in co-op.