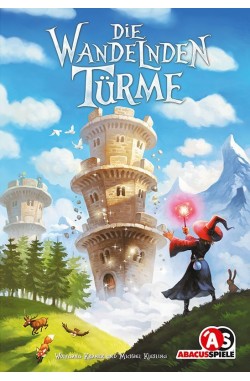 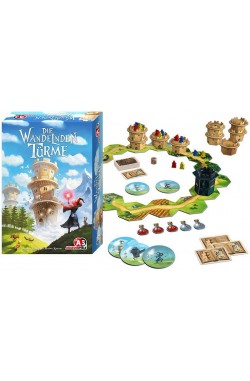 Levertijd: Voor 14u besteld, vandaag verzonden
Prijs: 39,50€
Bij een bestelling van 50€ betaalt u: 37.53 €
Bij een bestelling van 100€ betaalt u: 35.55 €
BESTELLEN
Verlanglijst
Product vergelijk
Omschrijving
In Die wandelnden Türme ("The Wandering Towers"), you want to bring all of your wizards home to the raven castle before anyone else.
To set up the game, place the game board tiles into a circle, the raven castle on its starting space, and the nine towers clockwise from the castle; five towers have a raven shield on them. Distribute the players' wizards — 3-5 based on the player count — on the towers, and deal each player a hand of three cards.
On a turn, play a movement card from your hand, then play a second movement card, then refill your hand to three cards. Cards allow you to move one of your wizards, a tower, or either a tower or wizard. Movement is always clockwise; sometimes movement is a specific number of spaces, and sometimes it's determined by a die roll, with you being able to roll the die up to the number of times shown on your card.
When you a move a tower, any wizards on that tower are carried forward on it — and you can move a tower on top of another tower, trapping any wizards on that lower tower. When you trap one or more wizards, you fill one of your magic flasks; you must fill all of your flasks in order to win. Additionally, you can spend filled flasks to cast one of the magic spells active in the game, with the basic ones allowing you to move a wizard or tower. (Spent flasks still count as filled.) To free your wizard, you must move the top part of the tower away.
If you land a wizard in the raven castle by exact count, your turn ends, then the raven castle advances on the game board to the next unoccupied space or tower with a raven shield. Whoever places their final wizard on the raven castle and has filled all of their flasks wins.
Die wandelnden Türme can be played in teams, with or without a "master wizard" variant that makes lots of spells available.