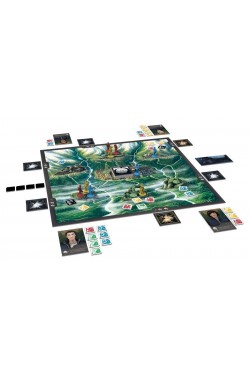 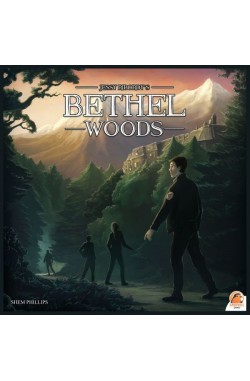 Levertijd: Wordt maandag verzonden
Prijs: 45,50€
Bij een bestelling van 50€ betaalt u: 43.23 €
Bij een bestelling van 100€ betaalt u: 40.95 €
BESTELLEN
Verlanglijst
Product vergelijk
Omschrijving
In the golden green woodlands of the Alpine Slopes, stands Bethel Woods; an orphanage once explored by young, creative minds pushing the limits of space and time, gravity and light. But when an ominous force invades the world, Bethel Woods becomes a distant memory, lost inside the thickets of the forest.
Now a group of young people, wearing the crest of the orphanage, return to finish the work that was started long ago. They must work diligently, however, to repair and restore the machines scattered throughout the forest, before the ominous force finds the technology and destroys the only chance the world has in surviving.
The cooperative game Bethel Woods is set in the universe of "Hours", created by author, Jessy Ribordy (Falling Up/The River Empires) and uses a mancala-like mechanism. Players first pick up all the Workers from any one of the 6 Machines surrounding the Orphanage, then move either clockwise or counter-clockwise around the board, dropping one worker on each Machine and fixing Malfunctions as they go. There are 4 Malfunction types, each with a matching Worker type to fix it. All Malfunctions that players fix are added to their personal supply as "Knowledge".
To win, players need to send 6 of the 12 Workers into Bethel Woods Orphanage with increasing amounts of Knowledge to construct the "Daydreamer" (a machine that will rescue the orphanage's inhabitants from the impending downfall). The first Worker needs just 1 Knowledge of their type, the second 2, the third 3, and so on.
Players also need to use their acquired Knowledge to uncover spies, hidden within each of the Machines. Players may uncover 1 Spy only on the last Machine they place a Worker on each turn.
After each turn, three random Malfunctions are drawn and added to the various Machines. If a Machine has more than 3 Malfunctions and/or Spies, it goes into the critical state. These all make the task of maintaining the Machines and constructing the Daydreamer that much harder. Also, any round where at least one Machine goes critical, results in a Spy being placed.
Players lose the game if at the end of a player's turn, there are 4 critical Machines. They can also lose immediately if there are ever 6 Spies on the board or not enough Malfunctions when placing them.