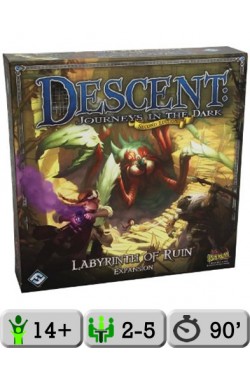 Descent: Journeys in the Dark (Second Edition) – Labyrinth of Ruin

Set in a previously unexplored region of Terrinoth, Descent: Journeys in the Dark (second edition) - Labyrinth of Ruin takes players on a riveting journey to the broken remains of a forgotten city. Throughout the many quests included in this expansion, heroes will enlist the aid of unique allies in their mission to stop the evil overlord.

The comprehensive campaign in Labyrinth of Ruin features nineteen narratively rich quests. While they can be enjoyed as standalone experiences, these engaging adventures were designed with campaign play in mind, telling the story of an enigmatic sorceress's vile plot to bring darkness to the world; as with the base game's campaign, "The Shadow Rune", Labyrinth of Ruin uses a clever plot system that reacts to players' successes and failures. With each successfully completed quest, either the heroes or the overlord will grow in power...leading up to a gripping showdown in the campaign's finale!

A new Overlord deck in Labyrinth of Ruin provides an alternative to the core game's fifteen basic Overlord cards, while cunning new monsters add their strength to the forces of evil. Hero players benefit from the addition of four brave new characters and four versatile new classes: Beastmaster, Treasure Hunter, Hexer, and Apothecary. All of this – along with new Travel Event cards, Condition cards, Shop Item cards, and two green power dice – ensure even greater customization and replayability than ever before!